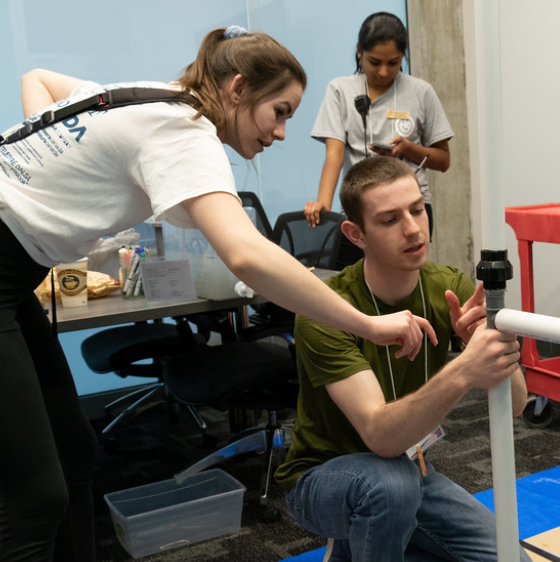 For over 30 years, the Canadian Engineering Competition has brought together the top engineering students from across Canada to focus on practical problems faced by industry. It provides engineering undergraduates a unique opportunity for students to apply the knowledge they’ve gained in school, while participating in exactly the type of cross-disciplinary collaboration they will need to excel as they enter their careers.

This year’s competition took place March 1 to 4, 2019, and involved over 180 competitors representing 32 different institutions. Competition organizers worked together to create competition challenges with an overarching focus on the UN Sustainable Development Goals.

Reno Natalizio, one of the conference organizers, says the planning team sought to embody the values behind the Sustainable Development Goals as a team. “We learned to focus not just on our own technical challenge preparation,” he says, “but also on the social connections we were creating between competitors, judges, industry sponsors, and the general public.”

On Saturday, competitors built and prepared their solutions to the challenges, and on Sunday they presented their projects for adjudication. Notably, the placing teams across the competition’s eight categories represented 18 schools—a diverse cross-section of institutions from all parts of the country. Each team that attended the competition had first won one of four regional competitions—Atlantic Canada, Ontario, Quebec, and Western Canada.

Reflecting on the competition’s importance, Natalizio says, “This competition provides an outlet for innovation, creativity, and the articulation of engineering challenges to relevant stakeholders.” He adds that “the friendships and connections that competitors make are there to spark a passion and to last a lifetime.”

Notably, this year’s event included two special guests, the inaugural chairs of the competition, Richard Dunda and Frank Gerencser. They shared stories of the competition’s “humble beginnings” with the group of 25 that now organizes the event. While the event itself has expanded substantially since its inception, the current organizers said that the messages and experiences that Dunda and Gerencser shared still resonated in a big way. In addition, Engineers Canada participated in judging and also presented on licensure and 30 by 30 at the awards dinner.

To those interesting in creating their own engineering events, Natalizio offers a friendly piece of advice: “Find a team and go for it. Creating connections between diverse groups of engineers will enable us to solve the problems of the future.”