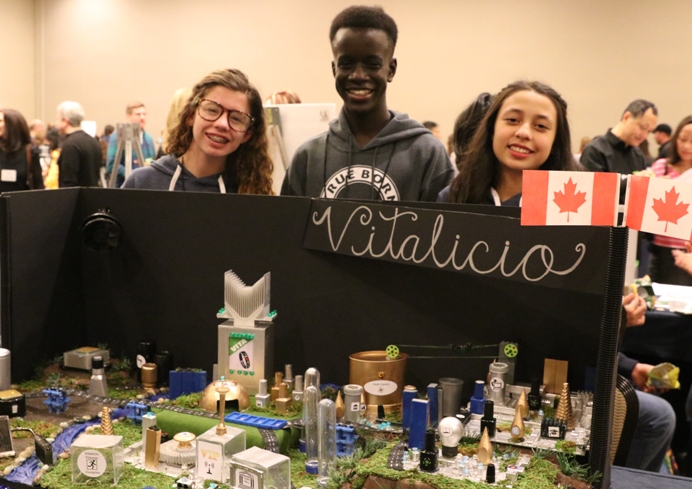 A shuttle service for seniors. Smart street poles that monitor air quality and provide virtual maps for passers-by. Sensors that alert drivers to crossing pedestrians. Personal electronic bracelets for each citizen to track vitals. Drones that provide emergency first response and medical supplies.
These possibilities for age-friendly cities 100 years from now are just a few of the forward-thinking ideas that Canadian students imagined, researched, and designed as part of the 2018 Future City Competition.
From February 17 to 21, 2018, a team of four students from Alexander Graham Bell Public School in Ajax, ON, and a three-student team from Grace Christian School in Charlottetown, PEI, traveled to Washington, D.C., to face-off against 42 other teams from the United States and China at the Future City Finals. This year, the Future City Competition asked students in grades 6, 7, and 8 to use the engineering design process to identify a challenge that exists in today’s urban environments and engineer two innovative solutions that will allow their city’s senior citizens to be as active and independent as they want to be. 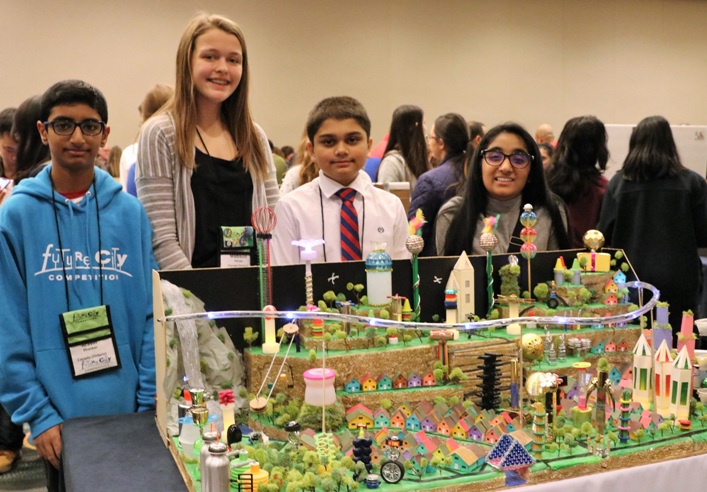 Grace Christian School’s Penelope Able, Christian Ndayegamiye, and Christianne Riveroll spent 39 hours over the holiday break to build the model of their city Vitalicio, in which each citizen is equipped with a Vita Technology System, a personal electronic bracelet that tracks their activity and vitals and forms a core part of the city’s proactive and preventative health system. With an emphasis on walking and biking, Vitalicio citizens are encouraged to stay active and socially engaged, while first response automated aerial vehicles deliver health supplies, monitor citizens’ safety, and come equipped with fire suppressors.
The Golden Age City, designed by 13-year-old Alexander Graham Bell students Madison Harvey, Shiv Patel, Aravin Shankar, and Sukhmanat Thukral, focused heavily on accessible transportation for citizens, and the ease with which they can remain independent, engaged, and active. The students designed a shuttle service for seniors, smart street poles that include virtual maps, and a precision band for the elderly that helps ensure their safety.
The team spent two and a half months working on their city, and built their city model during pizza parties after school, on weekends, and over Christmas break. They won their regional competition at the Durham District School Board in January to earn the right to compete in Washington, where they presented to judges from organizations like NASA, Shell, UL, Bentley, Bechtel, and the National Society of Professional Engineers.
“I know it sounds cheesy, but that’s what meant the most to me about Finals,” said Harvey. “That there were actual engineers there listening to us and our ideas for the next generation.”
And these ideas and their many hours of hard work earned them the Special Award for the Best Residential Zone, presented by the Chinese Institute of Engineers-USA for the best strategic placement of residential zones that allow maximum return for quality of life issues.
“We were on a high,” said the team’s teacher Robin Fleming, who is teaching intermediate science and using the Future City program for the first time this year. “They spent so much time folding every single paper house on the model using their template—even folding some during their other classes—and those houses are what won them the residential zone award.
“I’m proud of them for sticking with it. Even in Washington, where they could have easily slacked off, we found them practicing their presentation in the hallway of the hotel.”
Beyond winning the award, however, Thukral added that her favourite part about the Future City Finals was meeting new people and learning from them. “Hearing what other teams have done and the future solutions that other groups came up has given me some great ideas,” she said.
For her, that’s what the Future City Competition and the engineering design process is all about.
“This has been a great foundation to a possible engineering career because it’s about bringing together people with different ideas but who are working toward a common goal,” she added.
For this reason, the team’s teachers hope to see the program expand so that other students can reap the benefits.
“To me, this is STEM in action,” said Fleming. “It’s where teaching is at.”
“I hope other school boards adopt the Future City program,” added Kaitlin Calla, the team’s other teacher and mentor. “It’s such a great opportunity.”
Natalie MacNeill, the Grace Christian School team’s teacher, echoes the value of the Future City program. "This project has stretched my students’ imaginations,” she says.  “While I was thrilled to be Washington-bound with this team to represent our school, province, and nation, I was honoured to have watched my students see beyond what they once thought possible for themselves and to have embraced the challenges involved in becoming a visionary for the future.”
A program of DiscoverE, the Future City Competition has been held in the United States for 26 years, and with the generous support of sponsors and partners, Engineers Canada has brought the program to Canadian classrooms for two years in a row.