Barbara Kaneratonni Diabo has always been interested in the culture and stories from her Mohawk roots. A choreographer and dancer, she has been travelling around North America telling these stories through dance. Her biggest project, and she feels most important to date, is Sky Dancers: Bridges.

Sky Dancers: Bridges tells the story of the Quebec Bridge disaster of 1907. This bridge fell while under construction, killing 76 ironworkers, 33 of whom were Mohawks from Barbara’s hometown Kahnawake. Her personal connection to this event runs deep. She is the daughter and great-grand daughter of Mohawk ironworkers, and one of the men who died that day was her great-grandfather, Louis D’Ailleboust (Diabo). 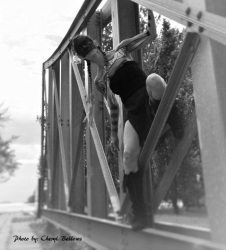 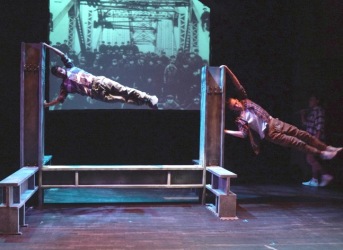 “I want people to feel the ‘human’ side of this,” Diabo says. “That it is not just an event, but real people are involved. We can all connect to sadness, healing, family, and compassion.”

The bridge fell due to errors made by engineer Theodore Cooper. He wanted to create the largest cantilever bridge in the world, and his ambitions led him to ignore the warnings of the men actually working on the bridge. By the time he started truly listening to their words, it was too late. The bridge collapsed, making it one of the biggest disasters in Canada. The reverberations from this disaster shook the engineering world as well as the small village of Kahnawake.

Diabo says that by telling the story of this disaster, she hopes it will help people “connect with each other more instead of just seeing each other as ‘stories’ or separate.” As she has worked on the production, she says she’s been surprised by how few people know about the event and the connection it has with Kahnawake.

Above all, Diabo says that working on the production has taught her more than she ever knew about the families who lost people. “One family lost four sons, an uncle, a cousin, and a brother-in-law,” she says.

“That must have been terrible. There were 56 children left fatherless after this disaster.”

Ironwork was and still is one of the main sources of income for the Mohawk people. This tradition of working on high steel started in Kahnawake in 1886 when CP Rail wanted to build a bridge near Kahnawake territory. “The company noticed that the local Mohawk men seemed extremely agile and fearless as they maneuvered themselves around the steel beams,” Diabo says. “Since then, the rest is history—generations of ironworkers take great pride in continuing to help shape the skylines around North America/Turtle Island.”

Sky Dancers: Bridges is currently under development, with a planned launch in fall 2019. Once complete, it will be a full-length show suitable for various size stages, as it is being made to be a fully-scalable show. As Diabo describes it, “An engineering feat in itself!” World renowned First Nations stage designer Andy Moro is building the production’s adaptable set, which, in combination with the music of Mohawk composer Michael Diabo and dancers from various nations and backgrounds, will put a human face on the disaster. “I hope it will touch all,” Diabo says, “engineers and general public, Indigenous and non-Indigenous alike.”

Barbara’s goal is to not only show her community’s contributions to society and support to the engineering profession, but to prompt people to understand more about their connections and genuinely build “bridges” between nations, cultures, and generations.

“The Mohawk people have contributed many things to society and despite many challenges, we are still here,” Diabo notes. “We are a resilient people. And I hope that Indigenous people who see this will feel pride in their own histories and overcoming challenges.”

For more information on the production and Diabo’s work, you can contact her at: barbaradiabo@yahoo.com.