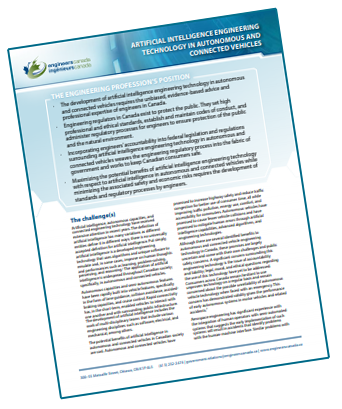 At its meeting on October 4, 2019, the Engineers Canada Board approved two new National Position Statements on artificial intelligence engineering technology in autonomous and connected vehicles, and on Indigenous people’s access to post-secondary engineering education.

The second National Position Statement that was approved by the Board argues that government support of Indigenous people’s access to post-secondary engineering education programs is key to ensuring that Canada remains a leader in the provision of intelligent capital in the global marketplace. Increasing the representation of Indigenous people in post-secondary engineering education provides significant benefit to Canadian society and the economy by increasing innovation, addressing skills shortages, and increasing diverse perspectives to solve complex problems.

The position statement argues that increasing Indigenous representation in undergraduate engineering programs begins in elementary school, requiring the creation of grade school supports that introduce science topics in a manner consistent with traditional knowledge. Post-secondary programs dedicated to improving the representation of Indigenous people are also critical in attracting and retaining Indigenous youth to the engineering profession.

Engineers Canada’s National Position Statements represent the collective position of the engineering profession and are meant to influence public policy and facilitate discussion with government. All of the position statements can be found on the Engineers Canada website.