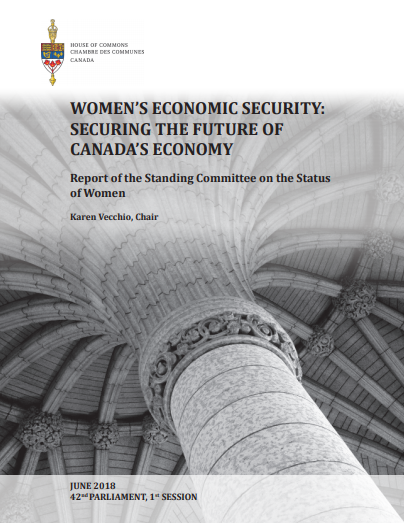 After almost a year of hearings, testimonies, and written submissions, the House of Commons Standing Committee on the Status of Women recently presented its report entitled Women’s Economic Security: Securing the Future of Canada’s Economy in the House of Commons. In its report, the Committee calls on the Government of Canada to implement measures to increase women’s economic security and ensure their full participation in the Canadian economy.

Engineers Canada submitted a written brief to the Committee in May 2017 with a series of recommendations on how to increase women’s economic security through their increased participation in the engineering profession. Engineers Canada’s Vice-President of Corporate Affairs and Strategic Partnerships Jeanette M. Southwood, FCAE, FEC, LL.D. (h.c.), P.Eng., IntPE, testified in front of the Committee in May 2017, and was one of 108 witnesses who the Committee heard from during this study.

Engineers Canada was proud to contribute to the Committee’s work and was encouraged to see that the Committee found the information provided in our submission and testimony to be of value to its study.

“This research should focus on identifying and addressing the factors that are deterring young women from pursuing post-secondary engineering disciplines, even though they have the necessary qualifications and credentials to enrol in those programs. Having this knowledge will be critical in allowing stakeholders to implement the appropriate interventions for addressing what deters young women from engineering.”

Recommendation 64 in the Committee’s report reflected this input and suggested “that the Government of Canada conduct research on the reasons and possible solutions for women’s under-representation in the skilled trades and in science, technology, engineering and mathematics fields.”

Finally, a number of the Committee’s recommendations are intended to foster economic leadership among women in Canada, including women working in traditionally male-dominated professions such as the skilled trades, the science, technology, engineering and mathematics (STEM) fields, and entrepreneurship.

The report will provide guidance to the federal government, who is currently working on efforts and initiatives to be implemented that will improve women’s economic security.