Engineers Canada’s annual National Membership Report collects information from the provincial and territorial engineering regulators about their membership in order to paint a picture of the engineering profession in Canada. The 2020 report captures data from January 1, 2019, to December 31, 2019. Engineer members are categorized based on the definition of practice in each jurisdiction. Please find here all data tables associated with this report.

Membership in the provincial and territorial regulators increased from 2018 to 2019. There were 305,285 members1 as of December 31, 2019 across the 12 engineering regulators comprising the national total membership (see Table 1). This is an increase of 2,409 members, or 0.8 per cent growth (in 2018 the increase was 2.3 per cent).2 While membership declined in some jurisdictions, the largest growth in numbers was seen in British Columbia (2,654 engineers), followed by Ontario (1,917 engineers). 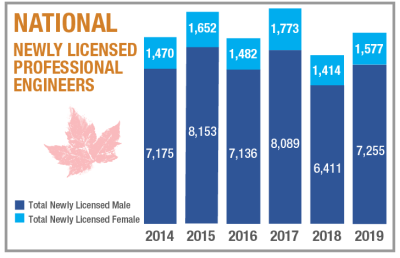 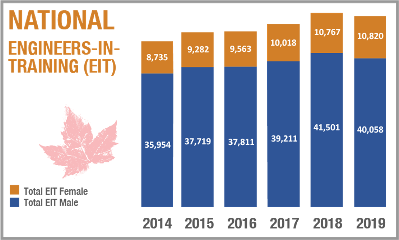 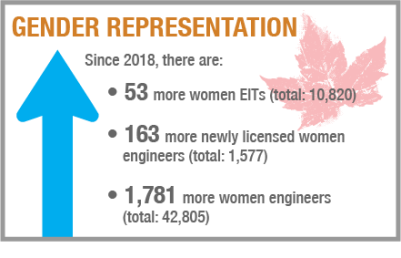 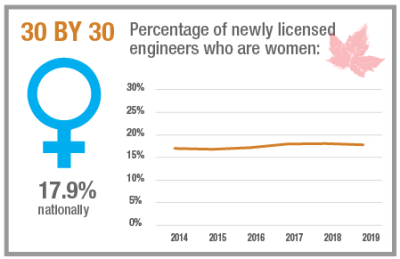 The largest increases, by region, of newly licensed engineers who are women between 2018 and 2019 occurred in Ontario (from 471 to 570), Quebec (from 385 to 425), and British Columbia (129 to 162). Alberta, Manitoba, and Newfoundland and Labrador saw declines in both women and men obtaining their licence.

The number of women EITs increased between 2018 and 2019, bringing the percentage of women EITs to the highest level they have been at since 2014 at 22 per cent. See Table 4 for the full breakdown of male and female EITs.

According to Engineers Canada’s report on engineering enrolment and graduation numbers,  there were 14,557 graduates from accredited post-secondary engineering programs in 2015.4 Assuming it takes a  minimum of four years for a graduate from an accredited engineering program to obtain their professional licence, we can estimate that those 2015 graduates (Cohort A) would be obtaining their engineering licence in 2019 and would be captured in the number of newly licensed engineers in this year’s membership data. Using these figures, we can calculate an estimation of the national conversion from graduation to engineering licensure.

In 2019, CEAB graduates made up 71 per cent of the total newly licensed engineers in Canada. This number went from 5,554 in 2018 to 6,290 in 2019 (see Table 2). Based on the number of newly licensed CEAB graduates in 2019, we estimate 42 per cent of Cohort A (2015) proceeded along the path to licensure. This is an increase from the previous cohort, where 40 per cent of the 2014 CEAB cohort were estimated to have received their license in 2018. Although this is an estimation, it is an attempt at measuring the successful continuation of engineering students along the pathway to licensure.

This analysis is particularly important in understanding the trend for 30 by 30 and how it relates to the increasing trend of female undergraduate enrolment and graduation. CEAB graduates make up the largest pool of potential engineers, including the largest number of newly licensed engineers who are women. Tracking the numbers of women in Cohort A we see that 2,615 engineering graduates were women. In 2019, 1,165 women were newly licensed by the regulators (Table 2). Using the 4-year graduate to licensure estimation we find a 45 per cent licensure obtainment rate in 2019 for Cohort A who are women, which is close to the overall conversion rate for Cohort A (42 per cent). Women are continuing on the pathway to licensure at a similar rate as their male colleagues upon graduation.

3 The category, Newly Licensed, includes individuals licensed as Professional Engineers for the first time that are Canadian Engineering Accreditation Board trained, Internationally trained, or have obtained their license by some other route. It does not include interprovincial mobility applicants.

Note on gender definition: gender identifiers have historically been limited to ‘male’ and ‘female’ in the survey of national membership. However, some regulators have indicated that they are collecting non-binary gender data, and one regulator provided data on members who submit ‘gender unknown’ in their surveys. For future data collection, Engineers Canada will begin collecting gender non-binary membership data.