We are the voice of our members in national and international affairs and promote greater understanding of the nature, role and contribution of engineering to society.

It has been an honour to serve as President of Engineers Canada in 2015. This past year has been one for strategic renewal, strengthening foundations, redefining linkages, reinforcing collaboration among our regulators and celebrating accomplishments.

We marked two anniversaries this year that are a testament to the great work Engineers Canada has done, and continues to do, in ensuring a world-class standard of engineering education and continuing professional development. Our Accreditation Board celebrated its 50th Anniversary in 2015, marking the occasion with celebrations in Toronto, Ottawa and Halifax where we thanked the volunteers, staff, faculty, students and other stakeholders whose hard work over the past half century have made the Board a success. It is their commitment to the highest level of quality and professionalism that demonstrate that accreditation is a valued part of an engineering education.

The Public Infrastructure Engineering Vulnerability Committee (PIEVC) marked its 10th Anniversary in 2015. Over the past decade, the PIEVC Protocol has encountered great success and has made Engineers Canada a world leader in infrastructure vulnerability assessment. Since it was first used in 2007, the Protocol has been applied more than 45 times in Canada and abroad, and more than 750 engineers and professionals have now been trained in its application. A testimony to its success, 2015 saw the first time the application of our PIEVC Protocol was included in the criteria of a government Request for Proposal for the design and building of infrastructure.

2015 also saw Engineers Canada initiate key projects and achieve important milestones. In January, in partnership with Engineers Without Borders – Canada, we convened the first workshop of the Engineering Change Lab, a platform for collaboration to help the engineering profession reach its full potential. We’ve met our target of securing five Champion organizations to contribute to and support the Change Lab.

Engineers Canada also launched 30 by 30 in 2015, our commitment to raising the percentage of newly licensed engineers who are women to 30 per cent by the year 2030. This is key to ensuring that the engineering profession is sustainable and is reflective of Canadian demographics. We were happy to receive national support for 30 by 30 from the provincial and territorial regulators.

We’ve also continued to make good progress over the past year with our regulatory framework, standards and practices. The Framework for Regulation drafted 21 new elements and revised 16 others, while the Qualifications Board completed two new Model Guides and published the Good Character Guideline, in addition to hosting several national meetings for collaboration and professional development.

All told, 2015 was an exciting year for Engineers Canada, and it was a pleasure to serve as President during this time. I look forward to the continued progress of these and many other projects and initiatives that Engineers Canada will undertake in the coming year to promote and enhance the engineering profession in the service of society.

Engineers Canada is to ensure that a current framework, standards, practices and systems, and a means to effectively transfer knowledge to facilitate regulatory excellence are available to the provincial and territorial engineering regulators.

The Framework for Regulation is a set of aspiration elements that exists to support the engineering regulators fulfill their mandate of registration of members, administration and governance, discipline and enforcement, and regulation of the profession. In 2015, Engineers Canada finalized and prioritized the list of current and proposed elements in the Framework, including the revision of 16 existing elements and the drafting of 21 new elements. An analysis of Framework elements and Qualifications Board documents was also completed to ensure alignment between the two.

In 2015, the Qualifications Board successfully completed the Principles of Climate Change Adaptation for engineers, and completed and published the Good Character Guideline, for use by the regulators, and organized several national meetings on continuing professional development, engineer-in-training, environmental and professional practice issues.

Accreditation Board and substantial equivalency 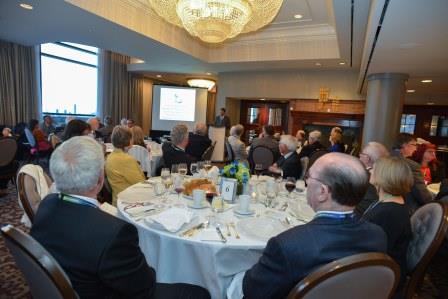 The Accreditation Board celebrated its 50th anniversary in 2015, marking the occasion with a September event in Toronto, and two other celebrations in Ottawa and Halifax in November to thank all those who have played a role in the Accreditation Board’s success over the past 50 years.

In 2015, the Accreditation Board completed on-site peer reviews of 56 programs at 13 academic institutions to determine that those engineering programs meet or exceed the educational standards acceptable for professional engineering registration. This enhances consistency in regulatory standards and practices and supports mobility within Canada and international jurisdictions.

The Board also simplified the documentation that programs receiving Board visits must complete and delivered workshops to train visiting team members on outcome assessments in order to reduce the workload on programs requesting accreditation and on Board volunteers.

Engineers Canada was the lead nominator of the Colegio Federado de Ingenieros y de Arquitectos de Costa Rica (CFIA), which was admitted to the Washington Accord as a provisional member in 2015. CFIA follow the criteria and procedures of the Accreditation Board and will continue to strengthen their accreditation system and seek signatory status in 2017 or 2019.

At the annual meeting of the National Discipline and Enforcement Group in June 2015, representatives from each engineering regulator shared updates, discussed issues about interpreting legislation and enforcing case outcomes, and reviewed cases and legal challenges that regulators had faced in the past year. The Group also identified priority areas for further study, including continuing professional development, member categories, reducing confusion around processes for authenticating documents, and increasing awareness and visibility of the regulators’ roles.

End 2: Confidence in the profession

Stakeholders have evidence that engineers meet high standards, practise with competence and integrity, and that their work and self-regulation benefit society.

The Public Affairs Advisory Committee reviewed and updates all Engineers Canada National Position Statements, including a complete revision of the statement on climate change. Four new statements were written and adopted by the Board on diversity, expert testimony requirements, federally regulated industries and qualifications-based selection.

In March 2015, Engineers Canada was invited to present to the House of Commons Standing Committee on Citizenship and Immigration. Chief Executive Officer Kim Allen, MBA, FCAE, FEC, P.Eng., spoke to the Committee about international engineering graduates and the importance of ensuring that newcomers to Canada are provided the best information and guidance to navigate the Canadian job market and become licensed engineers.

In the lead-up to the federal election in October 2015, Engineers Canada created a new election website to track the professional engineers running for a seat in Parliament, and to track each party’s platforms as they related to the engineering profession. We were highly encouraged by the Liberal Party’s use of Engineers Canada’s wording on climate change and resilience in their policy platform.

Once the election was completed, volunteers from the Bridging Government and Engineers Committee quickly began to reach out and meet with the returning and newly elected parliamentarians.

Engineers Canada celebrated the 10th anniversary of the Public Infrastructure Engineering Vulnerability Committee (PIEVC) and its work on infrastructure climate vulnerability assessment and resilience planning. The year saw the delivery of three PIEVC training workshops and three climate adaptation tools workshops, the completion of seven projects using the PIEVC Protocol, 20 presentations to all levels of government and stakeholders, and the first known inclusion of PIEVC and vulnerability assessment as required criteria in a government Request for Proposal. A new PIEVC website has also been launched with a searchable database of all assessments completed using the PIEVC Protocol.

December 2015 saw the end of Engineers Canada’s eight-year term as host and chair of the World Federation of Engineering Organizations (WFEO)’s Committee on Engineering and the Environment. The last year of its term saw Engineers Canada attend and participate in the UNFCCC Bonn Climate Talks in June and the COP-21 climate conference in Paris in December. Engineers Canada also delivered four regional webinars on the WFEO Model Code of Practice for Sustainable Development and Environmental Stewardship to train an initial cohort of engineers in Asia, Africa, Europe, the Middle East and Central/South America on use of the Model Code. It was also under Canadian leadership that the Committee developed the Model Code of Practice on Principles of Climate Change Adaptation for Engineers, which received unanimous approval from the WFEO General Assembly in December.

End 3: Sustainability of the profession

Strategy for a Sustainable Profession

In 2015, Engineers Canada received national support for 30 by 30, its commitment to raising the percentage of newly licensed engineers who are women to 30 per cent by the year 2030. Engineers Canada released the first national figures on the current state of the goal, encouraged the formal assignment of 30 by 30 Champions from each supporter, and published a 30 by 30 Guide for those wishing to contribute towards the goal.

In support of 30 by 30, Engineers Canada sponsored WinSETT’s Atlantic Series Workshop in Halifax, NS, and participated in its second year of the Engendering Engineering Success partnership. This included submitting a chapter on diversity for the Westcoast Women in Engineering, Science and Technology publication entitled, “Gender Diversity in STEM.” 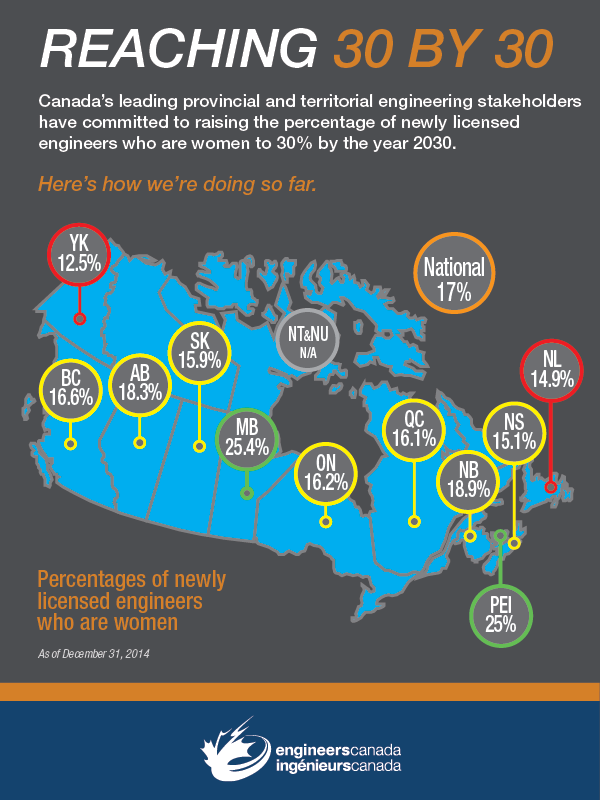 National Engineering Month 2015—with its theme of “Engineers Make a World of Difference”—saw more than 500 events take place across the country organized by hundreds of volunteers from the provincial and territorial regulators. Engineers Canada also hosted its own event on Parliament Hill, teaming up local engineering students with members of Parliament to build resilient infrastructure.

Engineers Canada ran an ad campaign in the Globe and Mail for this year’s celebration, which contributed to a 155 per cent jump in traffic to the National Engineering Month website. 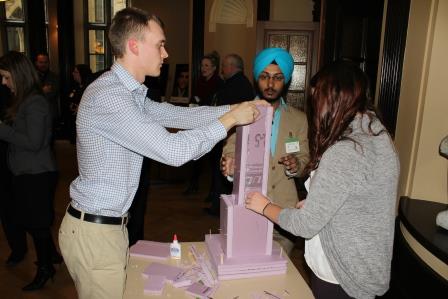 Engineers Canada continued to grow and augment its insurance plans and financial services to enhance the professional, social and economic welfare of professional engineers:

End 4: Protection of the engineering term

To ensure the public is not misled by persons improperly using engineering terms, titles, images and words in federal corporations and trademarks, Engineers Canada administers a program to protect against misuse.

Working with the provincial and territorial regulators, Engineers Canada provided its consent to 29 requests in 2015 from engineers to register a federally-incorporated company containing “engineering” or related terms in their names. 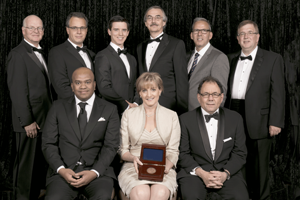 Back row, from left to right:

Seated, from left to right:

Each year, Engineers Canada, in partnership with Manulife and TD Insurance Meloche Monnex, award six cash prizes totalling $60,000 to professional engineers who are returning to university. 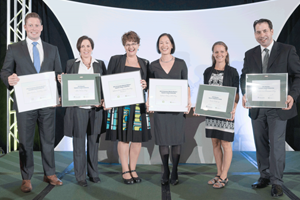 From left to right:

Professional engineers who have given noteworthy service to the engineering profession through their work with either Engineers Canada or the provincial and territorial regulatory bodies can be nominated for an Engineers Canada fellowship.

In 2015, 130 engineers were named Fellows of Engineers Canada.

In October 2015, Engineers Canada re-located its offices to a new location in a LEED Gold-certified building in downtown Ottawa. Among the features of the new office space are a large collaboration area, a spacious and engaging staff lounge, dedicated meeting rooms and 50 workstations, each equipped with a standing desk. This new workspace will augment the sense of collaboration and openness in the work environment, attract and retain top talent, instill corporate pride and encourage improved efficiency and productivity. 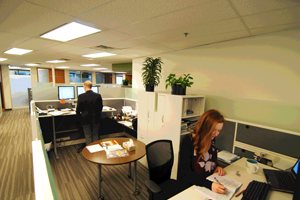 In 2015, Engineers Canada staff continued to demonstrate their deep community involvement and volunteerism: 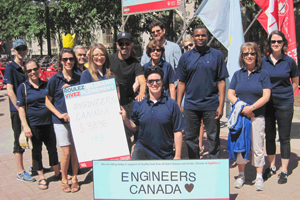 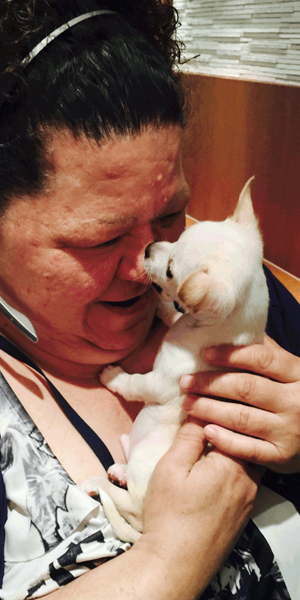 Engineers Canada is the national association of the 12 provincial and territorial engineering regulators in Canada.

Professional Engineers and Geoscientists of Newfoundland and Labrador (PEGNL)

Association of Professional Engineers and Geoscientists of Saskatchewan (APEGS)

The Association of Professional Engineers and Geoscientists of Alberta (APEGA)

Association of Professional Engineers and Geoscientists of British Columbia (APEGBC)

Engineers Canada thanks its partners for their ongoing support and contributions to its 2015 Annual General Meeting and Awards event.