Engineers Canada’s annual National Membership Report collects information from the provincial and territorial engineering regulators about their membership in order to paint a picture of the engineering profession in Canada. The 2022 report captures data from January 1, 2021, to December 31, 2021. Engineering members are categorized based on the definition of practice in each jurisdiction. Please find here all data tables associated with this report.

Overall, there was a slight increase in licensing and membership in 2021. These increases may be caused by the recovery from the COVID-19 pandemic, but further research is required to comprehensively understand the cause. Data presented in this report and future reports will allow us to better understand how global events impact the career trajectories of engineers in Canada. 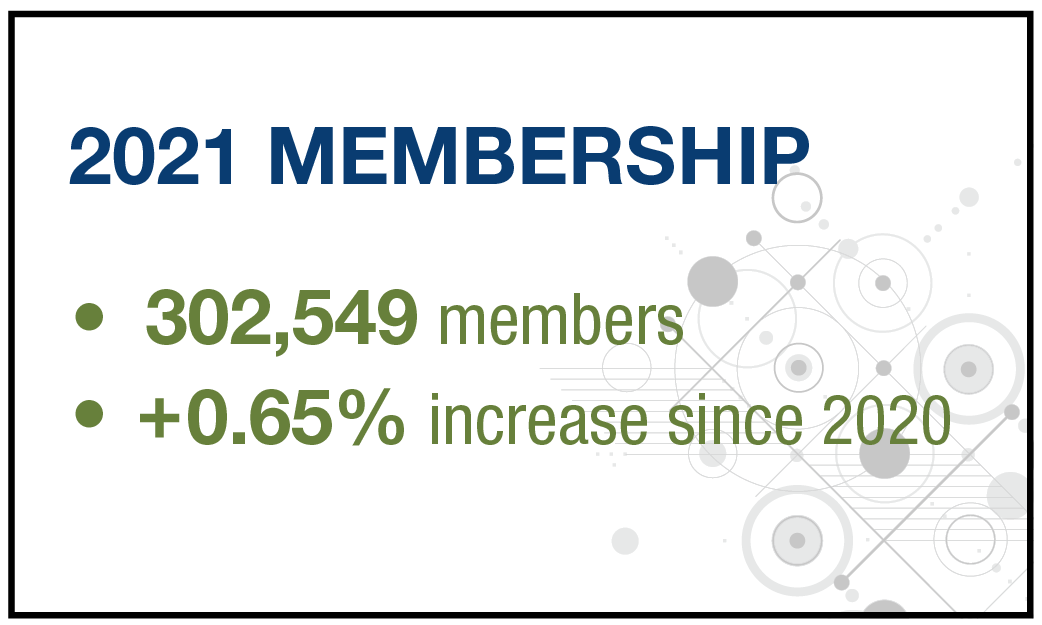 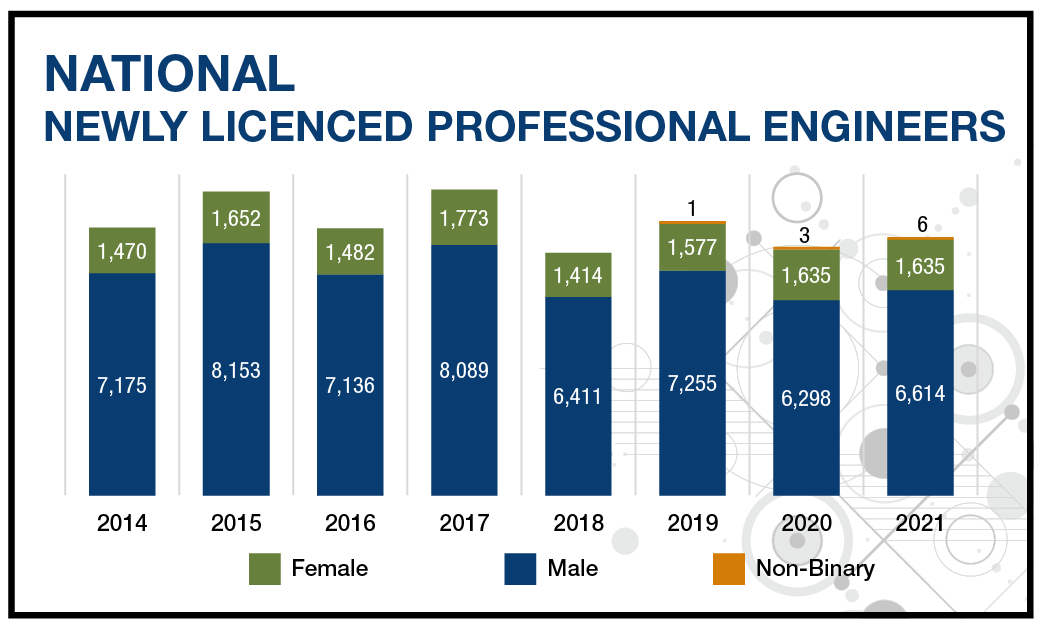 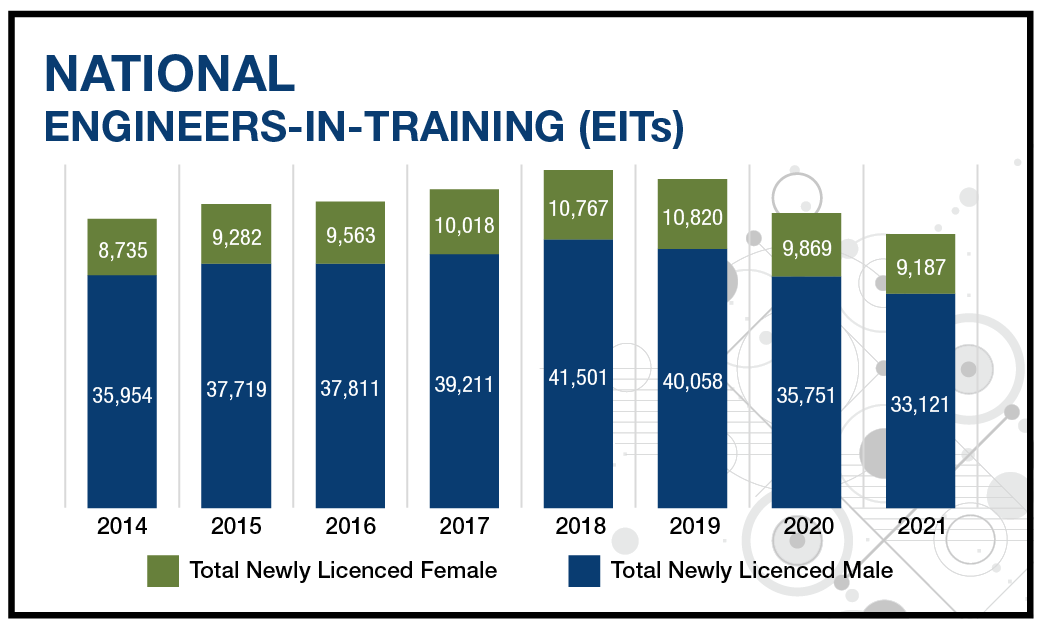 The number of engineers-in-training (EITs) decreased between 2020 and 2021, by 3,305 members. While the number of EITs decreased for all gender identities, the proportion of female-identifying EITs remains the same 21.6 per cent. See Table 4 for the national EIT data from 2014 to 2021. 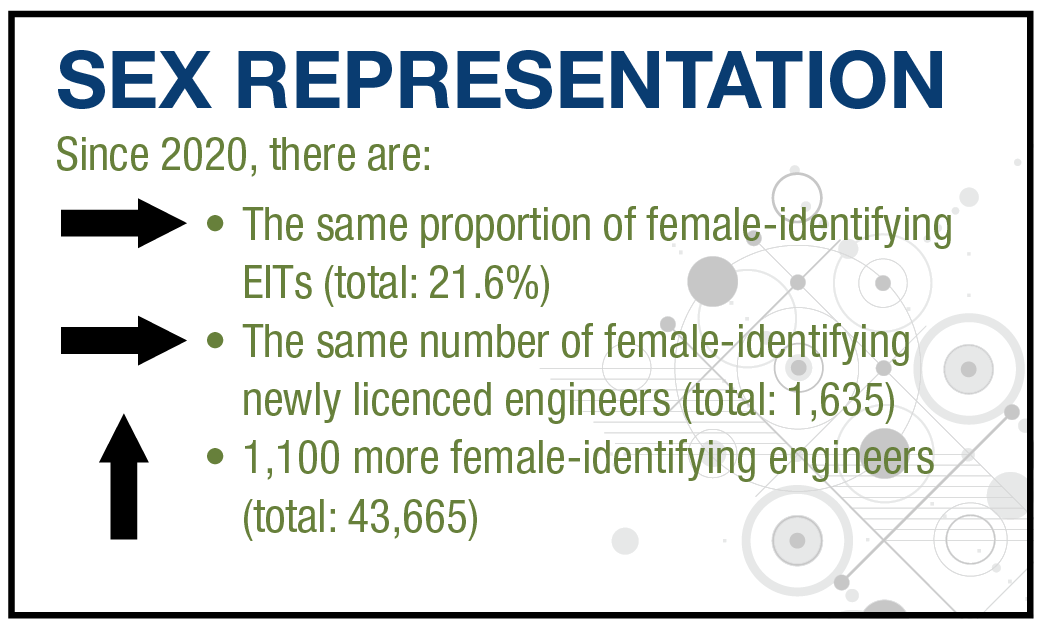 Engineers Canada and the regulators have been tracking the number of newly licensed female-identifying engineers since 2014, as part of the 30 by 30 initiative. In 2015, Engineers Canada launched the 30 by 30 initiative with support from the provincial and territorial regulators. 30 by 30 is a commitment to increasing the proportion of newly licensed engineers who are women to 30 per cent by 2030. 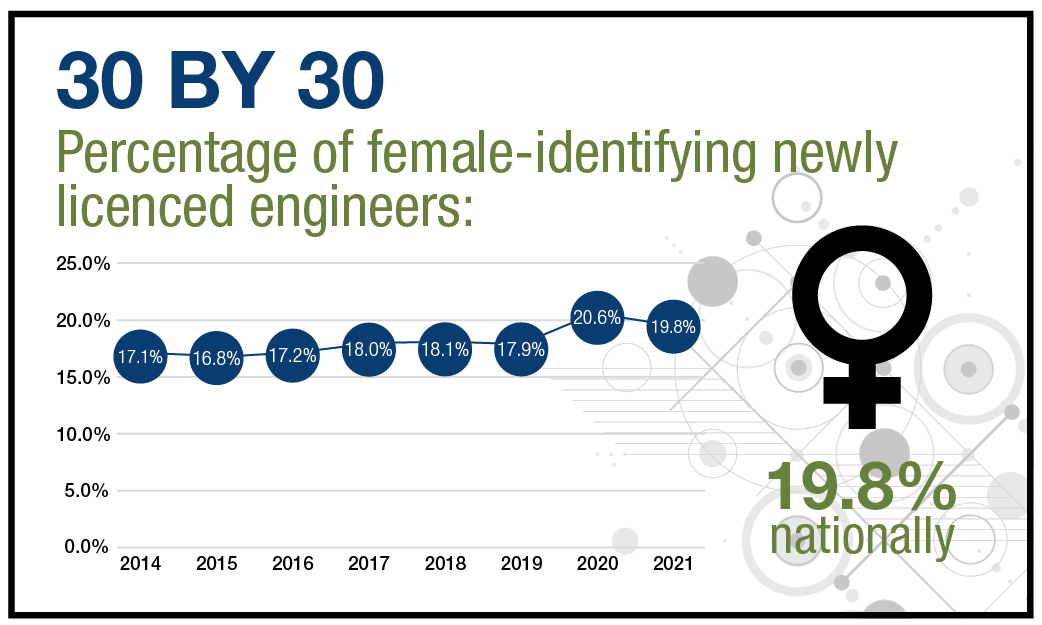 According to Engineers Canada’s Enrolment and Degrees Awarded Report 2015-2020,5 there were 15,782 graduates from accredited post-secondary engineering programs in 2017. Assuming it takes a minimum of four years for a graduate from an accredited engineering program to obtain their professional licence, we can estimate that those 2017 graduates (Cohort A) would be obtaining their engineering licence in 2021 and would be captured in the number of newly licensed engineers in this year’s membership data. Using these figures, we can calculate an estimation of the national conversion from graduation to engineering licensure.

Therefore, there is a decrease in the proportion of CEAB graduates obtaining their license after four years between Cohort A (2021) and Cohort B (2020). Although this is an estimation, it is an attempt at measuring the successful continuation of engineering students along the pathway to licensure. Given the impact of the global pandemic on the Canadian economy, early-career professionals may have experienced a slowed-down career progression in 2020. As described in section 3, the number of newly licensed engineers slightly increased between 2020 and 2021, from 7,936 to 8,340.

3. The category, Newly Licensed, includes individuals licensed as Professional Engineers for the first time that are Canadian Engineering Accreditation Board trained, Internationally trained, or have obtained their license by some other route. It does not include interprovincial mobility applicants.

4. Sex and gender definition: Sex identifiers have historically been limited to ‘male’ and ‘female’ in the survey of national membership.  We use “female-identifying” to describe participants who selected female, and “male-identifying” to describe participants who selected male, be as literal as possible, to limit the assumptions between sex and gender identifiers, and  to acknowledge the gender diversity that exists within these sex identities.