Join Engineers Canada, the engineering regulators, associations, post-secondary institutions, and engineering employers as we work together to make engineering a more inclusive profession.

Engineers Canada has long fostered collaboration with engineering regulators and other engineering stakeholders to work collectively and share authority, decision-making, and accountability to reach 30 by 30. Engineers Canada facilitates the work of the 30 by 30 Champions network, facilitates data collection and distribution on the composition of the profession, and advocates to the federal government on issues relevant to women in engineering.

Engineers Canada is working to increase the representation of women within engineering through its 30 by 30 initiative. This initiative, first conceived by the Association of Professional Engineers and Geoscientists of Alberta (APEGA) in 2010, was adopted by Engineers Canada as the national goal of raising the percentage of newly licensed engineers who are women to 30 per cent by the year 2030. Thirty per cent is universally held as the tipping point for sustainable change—reaching 30 by 30 will help drive the shift in the overall membership of the engineering profession as more and more women continue to enter the profession.

30 by 30 has received national support across all provinces and territories. Engineers Canada collaborates with engineering regulators and other stakeholders to facilitate a national vision on this issue. 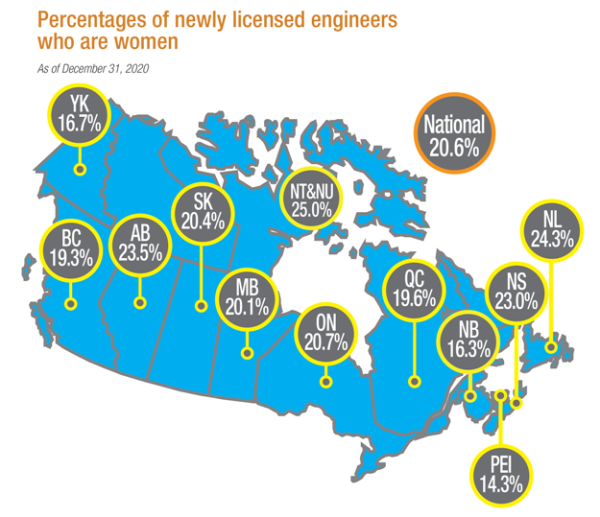 For more information on the breakdown of female-identifying newly licensed engineers see our 30 by 30 Data Presentation.

When an organization endorses the 30 by 30 goal, they nominate a Champion who actively engages in the 30 by 30 network. They also commit to investing in the creation and maintenance of programs and partnerships that lead to an improved experience for women in engineering; to sharing and applying best practices; to collecting metrics on the number of women in engineering in their jurisdiction; and to implementing policies that support the increased participation and retention of engineers who are women.