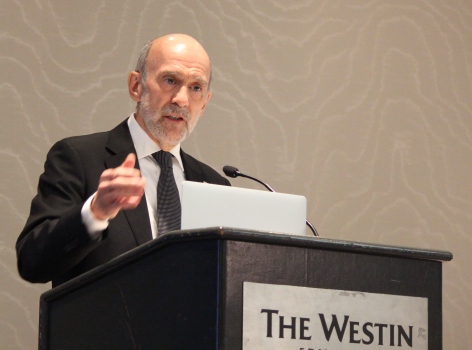 On January 2 to 7, 2020, delegates from Engineers Canada attended the Canadian Engineering Leadership Conference (CELC) at the University of Alberta in Edmonton. Formerly known as Congress, this annual, bi-lingual, student-run conference, now in its 52nd year, serves both as the annual general meeting of the Canadian Federation of Engineering Students and as a platform where students can collaborate with and learn from industry partners, sponsors, and fellow students.

This year’s conference theme was “Versatility in Engineering.” Modern-day engineers must adapt to an ever-changing profession, as well as rapidly evolving demands from a society with ever-more complex problems. Considering the current pace of change in the world, individual engineers have increasingly had to advance their knowledge and develop professional skills through multidisciplinary studies and experiences. Sessions at the conference covered a range of topics around versatility, including mental health, engineering and technological stewardship, entrepreneurship, networking, leadership, and engineering culture.

Muhammad Alum, VP Programming for the CFES and conference organizer, says that this year he and the CFES team sought to do things a little differently than in the past, providing attendees with “a diverse set of tools through informative sessions and panels.” To accomplish this, he focused on inviting more “professional speakers with different backgrounds” than had previously been a part of the proceedings.

On that front, Engineers Canada President David Lynch provided welcoming remarks at the partners’ dinner, highlighting the benefits of licensure, and later presented on "Vision behind the University of Alberta Engineering Safety and Risk Management Program."

Lynch was also a panellist on the "Versatility in engineering" panel, where he joined two others in a discussion on the conference theme. One of the key topics that came up on the panel, and indeed throughout the conference, was the topic of pathways into (and within) engineering. Panellists reflected on their own paths at various points of their careers, as well as the different “mixtures” they found when it came to technical vs. managerial roles, work in industry vs. academia, and so on.

Rounding out Engineers Canada’s representation was: Suzanne Kresta, an Accreditation Board member and also Engineering Dean at the University of Saskatchewan, who presented on Accreditation; and Jeanette Southwood, Vice President, Corporate Affairs and Strategic Partnerships, who presented on the engineer’s career pathway, the importance of balance, and Engineers Canada’s work and strategic plan.

Alum says he looks forward to seeing further tweaks in the conference’s structure in future years, with the aim of facilitating even better discussion among attendees. He feels that “CELC speakers should come from a wide variety of backgrounds including those without engineering backgrounds,” and says that perspectives from outside engineering made a valuable addition to this year’s speaker list.

With an expanding focus, there is consensus among this year’s organizers that CELC continues to be a great opportunity to reach out and engage engineering student leaders from every institution and field of engineering. In exploring themes relating to the changing nature of engineering, these same student leaders will indeed be better positioned to extend their leadership well beyond their time at university.