Celebrating 100 years of engineering in Canada 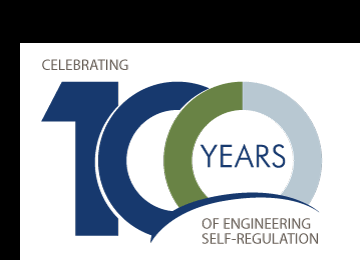 Engineers Nova Scotia: Nova Scotia celebrated their centennial on October 14 with a centennial video, and a Centennial Photo Contest in which they selected, from many submissions, the images that most reflect engineering, excellence, and diversity.

Engineers Geoscientists New Brunswick: New Brunswick has celebrated their centennial with a centennial video and a call for design for an outdoor sculpture celebrating the 100th anniversary of engineering in the province.

APEGA: Like Manitoba, APEGA has been celebrating their centennial year by commemorating key engineering moments of engineering history in Alberta using the hashtag #APEGA100 and on their website discoverAPEGA.ca. They too held a photo contest in which they asked APEGA members to send their best photos capturing the spirit of engineering and geoscience in Alberta. The photo contest winners, historical facts, social media content, and centennial gear is available on APEGA’s website.

Engineers and Geoscientists BC: In early 2020, prior to the COVID-19 pandemic, Engineers and Geoscientists BC held their Centennial Celebration on March 5 in Vancouver. They also featured three feats of engineering and geoscience from the past 100 years in 3D chalk art installations in March. The celebrations have continued online throughout the rest of the year, with lookbacks through their history on social media and on their website timeline, and with their STEM Leaders of the Future contest.

Engineers Canada sends the happiest of birthday wishes to all the regulators celebrating 100 years of engineering this year!