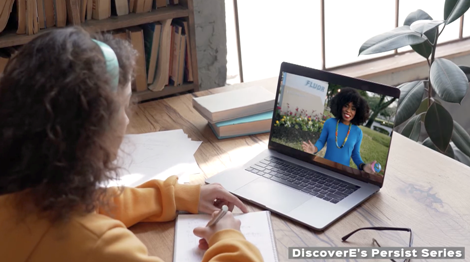 DiscoverE’s Global Marathon dates back to 2005, when it first launched as a true marathon of sorts —a 24-hour teleconference for women in engineering and tech around the world with a new session every 30 minutes that provided a space for candid discussions about the issues women face in a male-dominated field.

This format eventually evolved into five weekly presentations and webinars taking place in March and April each year. In 2021 however, Global Marathon will evolve once more, and relaunch as a year-long program of monthly episodes under its new name, the Persist Series.

“What we learned from participants over the years is that hearing from and meeting women around the world is inspirational,” says Thea Sahr, DiscoverE’s Director of Communications and Programs. “But participants wanted and needed more. So, we added career advice and specific strategies they can use to persist in their careers. Things like learning how to navigate bias, assert themselves, and effect change in their organizations to create more inclusive workplaces. And we heard that our participants want these types of conversations on a more regular schedule.”

Media coverage of the 30th anniversary of the Montreal Massacre

DiscoverE has long been an advocate for engineering outreach in the United States. DiscoverE was formerly the National Engineers Week Foundation founded by the National Society of Professional Engineers (NSPE) in 1951 in the United States. Thirty years ago, DiscoverE was the first organization to recognize the need for engineering outreach when it called on engineers around the United States to work with young students during Engineers Week 1990. Since then, tens of thousands of engineers have participated as role models and provided hands-on engineering experiences to millions of K-12 students, with a particular emphasis on girls. With the Persist Series, DiscoverE hopes to support those girls and women in engineering throughout their careers.

“We wanted to create an initiative that builds on DiscoverE’s successes engaging girls in engineering by equipping them to stick with it when they are overlooked or actively discouraged,” Sahr says.

The inspiration behind the new name of the program comes from a research report that DiscoverE published in 2019 entitled “Despite the Odds: Young Women Who Persist in Engineering.” The paper identifies common factors shared among women who persist in engineering careers.

“We’ve learned so much over the years about why women leave the engineering and tech field, and this is our opportunity to flip the conversation to why women stay,” explains Kathy Renzetti, DiscoverE’s Executive Director. “We really wanted to be intentional about creating a series that can help women advance in their careers and impact systemic change.

“The word “persist” signifies not only the tenacity and determination of women in the field, but also our resolve to work continuously to dismantle the systemic barriers that hold women back and build the inclusive work cultures the field needs to do its best work.”

In the short-term, DiscoverE hopes that the Persist Series will help women and their supporters feel better equipped to effect change within their organizations to create more welcoming workplaces for people of different races and ethnicities, physical abilities, culture or religious backgrounds, and sexual orientation or identities.

“We’d love to see the gap close between what organizations think they’re doing to empower women and how the women who work there actually feel,” Renzetti says.

Over time, DiscoverE would like to see more organizations committing to institutional changes that fast-track women into leadership roles and supporting their long-term success. Ultimately, the goal is to create a career culture where all women feel a strong sense of belonging—both to fulfil their drive to make meaningful contributions and to shape the diverse workforce the field needs to solve complex problems and advance humanity.

Sahr describes, “As women have often commented during our programs, ‘Go where you are celebrated, not tolerated.’”

The Persist Series launches on February 21, 2021, and will continue throughout the year on the second Wednesday of each month. Each episode will discuss topics like inclusive workplace cultures, being an active bystander to casual bias, and developing a growth mindset. February’s episode focuses on the values and priorities the field needs to transform engineering culture, and features Vanessa Raponi, EIT, founder of EngiQueers Canada, a non-profit organization and network of queer engineering students and allies that represents over 30 similar member groups at engineering schools across Canada.