Highlighting the role of engineers in the Royal Canadian Navy 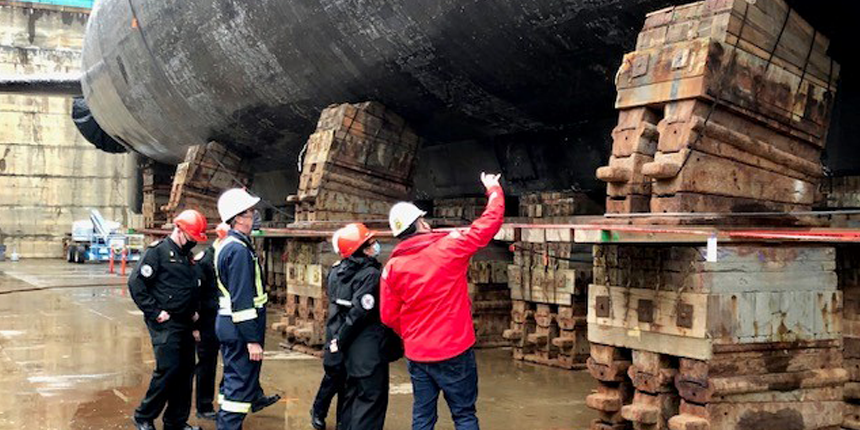 “Visiting these sites was a valuable opportunity to connect with members of the Royal Canadian Navy, and get a firsthand look at the important work they do,” says Southwood. “What has struck me most is the deep camaraderie that exists within the navy.”

Appointed by the Minister of National Defence as the first Honorary Captain to be affiliated with the naval engineering community, Southwood joins other Honorary Captains who are leaders in their respective fields. Honorary Captains come from across the nation, each one committed to making a difference for Canada.

While in Victoria, Southwood toured Her Majesty’s Canadian Ships Nanaimo and Vancouver, learning about life aboard navy vessels and how engineers maintain and improve the ships. She also toured the Victoria shipyards, where a Halifax-class frigate and submarine are being modernized to meet the ever-evolving needs of the navy. Suiting up in protective gear, Southwood also toured the Damage Control Training Facility, learning how personnel mitigate flooding, fight fires, and work under conditions where the air can become toxic.

“The role of engineers in the Royal Canadian Navy is very important,” says Commander Suzanne Appleton, Senior Integrated Logistics Support and Supportability Engineer within the Transition team at the Project Management Office for the Canadian Surface Combatant. “We play an integral role in the fleets and in our various support organizations ashore.”

Engineers within the navy work at sea and on shore to support the fleet. This includes leading the shipboard engineering departments, supporting maintenance programs at fleet maintenance facilities, managing technical projects for in-service equipment sustainment and replacement, and leading major capital projects for the future fleets, like the Arctic Offshore Patrol Vessels.

“HCapt (N) Southwood’s appointment is especially significant to the under-represented and racialized members of our community,” says Appleton. “In my experience in the Canadian Armed Forces, it is rare to see a racialized woman in the engineering domain at such a high level. Being able to identify with her in this manner gives me a lot of optimism for my own career path. There is a lot of potential for both the Canadian Armed Forces and Engineers Canada to learn from each other’s experiences and share program ideas on increasing diversity and inclusion in engineering.”

It was the opportunity to help highlight the need for greater diversity, inclusion, and equity across all facets of the engineering profession that attracted Southwood, a Black engineer, to this volunteer role as an Honorary Navy Captain.

“A diversity of ideas, perspectives, experiences and people are critical in the success of any endeavour. This is true in engineering as well the Canadian Armed Forces, where the lives of Canadian sailors are on the line,” says Southwood. “Part of achieving this means forging bonds with and strengthening peer, social, professional and technical networks. There’s still a long journey ahead, but I’m proud to have the opportunity to be part of the continued evolution of this institution. None of us journeys alone.”

More information about the Honorary Captain program is at http://www.navy-marine.forces.gc.ca/en/about/in-depth-hcapts.page.