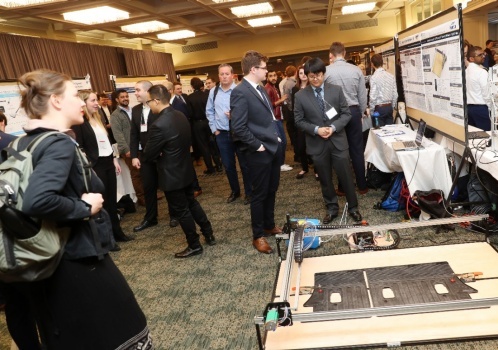 When someone suffers a hand injury and has to go to the emergency room, ring removal must be done very gently to avoid risk of further injury. This can cause problems for doctors because no good solution to ease off rings that people have outgrown has existed in the past. That was precisely the problem that one of Dalhousie University’s mechanical engineering teams aimed to solve with their contribution to the 2017 Dalhousie Engineering Capstone Conference.

Each year, over a hundred teams from across the engineering disciplines come together to celebrate their graduation at the conference, presenting capstone projects to fellow students, professors, family, industry professionals, and more.

According to Clifton Johnston, Dalhousie’s NSERC Chair in Design Engineering and Associate Professor of Mechanical Engineering, the conference is unique in that it’s one of the very few forums that demonstrates the breadth and depth of the contributions that engineers make to society.

“This is an opportunity for students to share their work publicly for the first time,” he says. “It shows the students that we take their achievements seriously, and they treat the conference with the utmost professionalism.”

The conference grew out of a smaller poster program that Johnston helped develop early on in  his mandate as Design Chair. In its first three years, the event took place in the school’s gymnasium, but when plans for on-campus construction indicated that the facility would be repurposed as lab space, he saw it as an opportunity to think bigger.

He worked with several of Dalhousie’s prestigious cohort of Engineers-in-Residence to find a venue that could turn the existing capstone event into something more significant. They found a perfect spot in the Westin Halifax and began plans for their 2017 launch. By its second year in 2018, the conference saw participation from over 400 students making up over 100 project teams.

Among these was the team that took on the challenge of automated ring removal. To develop their idea, the team of mechanical engineering students spoke with emergency room doctors some of about the technical challenges they faced in their work. That’s how the team discovered that the only solutions in place were to either cut rings off or suture fingers to reduce their profile – neither of which was desirable. Working together, the student team developed a small device similar to a blood pressure cuff, which could temporarily restrict blood flow to shrink finger size.

An impressive 75 per cent of the teams develop their ideas through such industry partnerships, many of which are facilitated through the existing connections of the Engineers-in-Residence. Other solutions from students have included projects as diverse as a process engineering design for an artificial waterway to facilitate fish movement between Sullivan’s Pond and Halifax Harbor, and an industrial engineering project to help the Nova Scotia Nurses Union automate training around standard operating procedures.

Johnston notes that, in certain cases, student projects have also had a direct impact on the success of local businesses. “A lot of larger companies can afford to solve their own challenges,” he says, “but some smaller businesses, such as two local bath product manufacturers who’ve worked with our capstone students, have really benefitted from our students’ contributions to helping them automate parts of their business.”

As for the team that developed the automated ring removal device, they have since gone into business as Ring Rescue Inc. and have recently started taking preorders for their device. According to team members Mason Landry and Patrick Hennessey, the capstone conference provided them with exposure to professors and industry partners that eventually made the launch of Ring Rescue possible.

“One of the biggest benefits of the Capstone Conference,” Johnston says, “is that students must communicate about what they’ve worked on. This forms a critical part of their professionalization as they move on to become Engineers-in-Training.”

Johnston’s sentiments ring true for Hennessey and Landry. “Several professors took interest in our project,” they note, “and recommended we attend an entrepreneurship program to develop our idea further.”

Clearly the benefits of programs like this continue well after graduation. As Johnston puts it, “Engineering students deserve to be proud of what they’ve accomplished. They can say at the end of this program ‘I did this thing. I solved this problem.’”