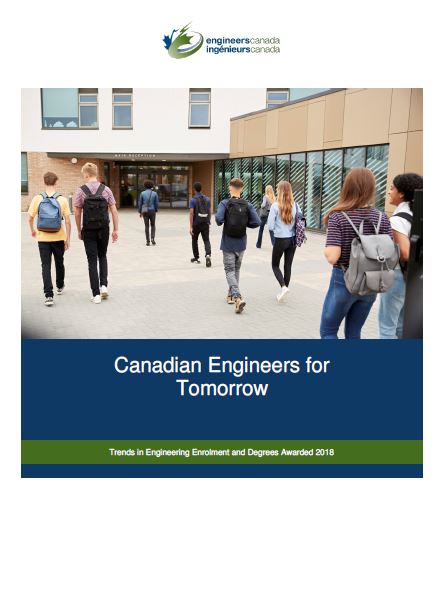 A new report from Engineers Canada, Canadian Engineers for Tomorrow: Trends in Engineering Enrolment and Degrees Awarded 2014-2018, continues to show strong growth in undergraduate degrees awarded. In 2018, 18.9 per cent more engineering degrees were awarded than in 2014. In addition, most engineering disciplines have experienced a growth in undergraduate enrolment numbers in the same period.

For the fourth consecutive year, Engineers Canada collected data regarding Indigenous students’ enrolment and degrees awarded. Indigenous peoples are still greatly underrepresented in engineering education, accounting for only 0.5 per cent of reported undergraduate students. This is approximately ten times lower than the 4.9 per cent of people in Canada who identify as Indigenous.

Engineers Canada thanks the HEIs for their extensive work in contribute their data.

The data for this report was collected using our new collection platform, Tandem. Feedback provided by many HEIs familiar with the previous system indicated that Tandem required less time to enter data. Among that feedback, several respondents commented that Tandem was better organized and flowed more logically, while others described it as “extremely easy to use.”

As a result of feedback heard from Tandem users, several improvements are being implemented for the data collection cycle for next year’s report, which begins this month.

Read the full report on the Engineers Canada website.