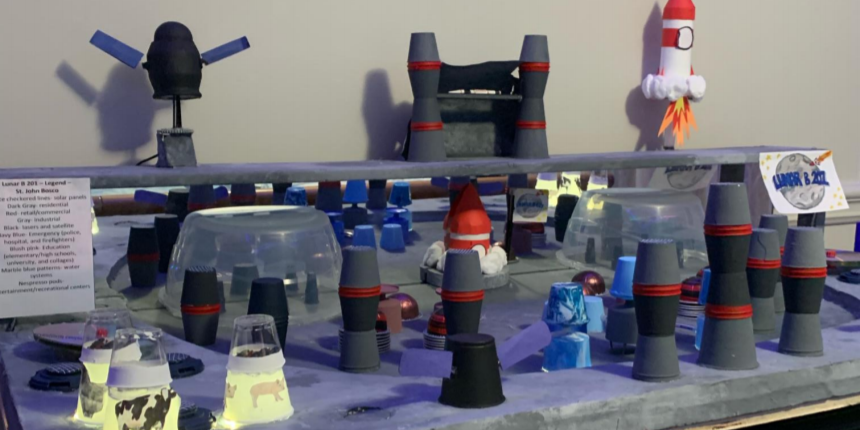 More than 1,000 students in Grades 6-8 from across Canada proudly showed off their visions for future cities on the Moon in the first Future City Experience Showcase, organized and hosted by Ontario Tech University on May 5.

Working in teams, students spent February through April using the engineering design process to research, plan, and build a scale model of a lunar city. They then presented their models during the virtual Showcase, where they met with a panel of engineering volunteers to present their designs, receive feedback, and have their future city ‘stamped’.

Engineers Canada partnered with Engineers of Tomorrow to recruit, train, pair, and support members of the engineering community who volunteered to serve as mentors for participating classrooms. In total, 97 volunteers were trained as Future City mentors, and they virtually visited their paired classrooms at least twice between February and April to connect with the students and help them design their lunar cities.

It was also the first year that Future City programming was offered entirely virtually as a result of the COVID pandemic. This shift to virtual programming, while challenging, also spurred innovative solutions.

When the pandemic led to a shift to at-home and online learning for many school boards across the country and students discovered they would no longer be able to access their physical city models, they innovated like aspiring engineers and figured out how to build their cities completely virtually using free open-source technology.

“The technical problem solving of this group has blown me away,” said Catherine, an Ontario educator. “They figured out how to put all their models into one file, textured it, and are rendering it at a render farm like a bunch of pros!”

“This has been a very challenging year for students and teachers across Canada who have been thrown into distance learning,” said Kim Bouffard, Engineers Canada’s Outreach Manager. “The students and teachers that participated demonstrated resilience and determination and I have been impressed and inspired by the students’ creativity and problem-solving skills; qualities we are looking for in our future engineers.”

Like any collaborative effort, the Future City Experience wouldn’t have been possible without the support of many organizations, volunteers, educators, and students.

“Engineers Canada extends its sincere appreciation to Engineers of Tomorrow and Ontario Tech University for partnering on this project,” added Bouffard. “We also owe a debt of gratitude to OIQ for providing translation support to francophone participants, and to our dozens of engineering volunteers who made classroom visits and who participated in our live Q&As to make this an unforgettable experience for the more than a thousand students who were inspired to think about what life would be like on the Moon.”

Each week throughout March, National Engineering Month has been spotlighting various aspects of the engineering profession—from the collaboration between engineers and other professions, to diversity, equity, and inclusion in engineering, to the engineering students and the next generation of engineers.

National Engineering Month spotlights the next generation of engineers

Monday, March 8 kicks off the second week of National Engineering Month 2021, and also marks International Women’s Day. During this second week of Canada’s largest celebration of engineering, we’re placing a focus on diversity, equity, and inclusion in engineering.