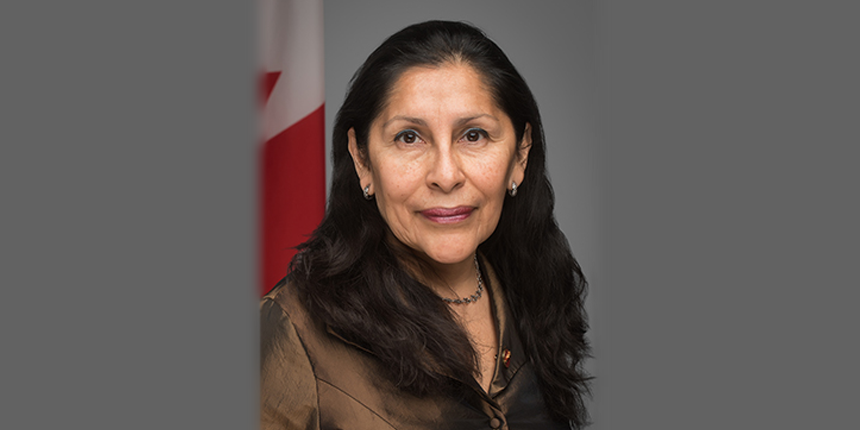 Engineers on Parliament Hill is an Engineering Matters series featuring interviews with engineers who hold federal public office. Below is the fourth in the series, a Q&A with Senator Rosa Galvez, ing.

Galvez was appointed to the Senate of Canada in December 2016 representing Quebec (Bedford). Originally from Peru, Galvez is one of Canada’s leading experts in pollution control and its effect on human health. She has a Ph.D. in Environmental Engineering from McGill University and has been a professor at Université Laval à Québec since 1994, heading the Civil and Water Engineering Department from 2010 to 2016. She specializes in water and soil decontamination, waste management and residues, and environmental impact and risk assessment.

Engineers Canada: What sparked your interest in engineering? What motivated you to study engineering?

Rosa Galvez: I have cared about the environment, particularly water, for a very long time. My grandparents living in the Peruvian Andes took water from artisanal wells and surface water sources that they shared with their cattle. I knew there was a risk for getting sick from drinking these waters.

At school I always performed outstanding in math (must be in the genes because my father was a math university professor and my mother was an accountant J). I was one woman in a class of 500 engineering students, I studied civil engineering with concentration on sanitary engineering managing water, wastewater, and solid waste.

I arrived in Canada in 1985 holding in my pocket US$50. My husband at that time encouraged me to continue graduate studies, which I did at McGill University. I specialized in environmental engineering, which regards other aspects as contaminated land, environmental impact assessment, and, more recently, climate change.

Fast forward 45 years [since my childhood in Peru], I was particularly touched from having witnessed firsthand the Lac Mégantic disaster when a train carrying unconventional oil derailed and exploded instantaneously killing 47 people. I spent five years studying the devastating impacts around the city and the Chaudière river. I did the forensics of the accident and gave recommendations on five areas to prevent this type of accident from happening again.

In sum, from early on in life, I perceived pollution to be a severe problem affecting unequally vulnerable people, thus an injustice.

EC: What prompted you to work towards and earn your professional engineering license? Would you encourage other engineering graduates to earn their P.Eng.?

RG: What attracted me to engineering instead of a diploma in natural sciences was the drive to find solutions, not only to know about the problem. It was crucial for me to create, design, dimension, construct, and solve a pollution problem. In my career as researcher, I have always worked to solve an existing pollution problem in practice not only in theory. By becoming a licensed engineer, you have to remain updated on the codes and state-of-the-art practice of engineering. This aspect was crucial for me. When you are a professor that trains and educates engineers, I believe we need to show them examples from practice and remain knowledgeable on the progress of the profession in real life.

RG: I had been recognized by my research peers around the world as an outstanding researcher in an emerging field where we need skilled professionals to solve so many environmental problems. I realized very early in my engineering profession that environmental legislation is mostly to control the level of pollution and to allow or permit pollution, but definitely not to stop it. I also remarked that the more research projects I conducted and progressed I had to convince a large variety of stakeholders that pollution was not acceptable and that restoration, remediation, clean-up, and treatment were essential to quality of life and public health and safety. I had also participated in university administration and realized I had to influence at the level where decisions were made. I applied to be a senator, but I didn’t have any idea of my chances to occupy one post.

EC: Has your engineering background helped you in your role as a senator? How?

RG: Absolutely, having knowledge of what is going on with communities that need clean water, air, or soil for survival, their social or economic activities, gives you a lot of insight into what communities, citizens need and aim for. During the training of an engineer, we are basically taught how to analyze, evaluate, and measure a given problem; this is of great help. How can we aim to solve a problem if we haven’t measured it? Often in politics, I find politicians promised many things they cannot deliver because they don’t know the size or extent of a problem or they can’t make the distinction between a cause and an effect, so most concentrate in mitigating the effects while keeping the causes intact. The best example of this is how we manage climate change; we need both mitigation (not only reducing the GHG emissions, but stopping them) and adaptation (because climate is changing dramatically and our infrastructures are impacted and engineers need to adapt their practice to include the risks of climate change).

RG: There is no doubt that our code of ethics in the engineering profession is something that I’m very proud of. We have as our first principle the protection of the public. We know we have to design, construct, operate, and dismantle infrastructure in a safe manner. More recently, we are asked to consider sustainable development and, for example, increase efficiency (e.g. energy, use of water, or resources). We are always seeking to increase efficiency and efficacy.

The second engineering value that I find important is that we seek knowledge transfer and innovation, and we know the importance of research and development. If I can infuse some of these engineering principles, values, and perspectives into politics, I think the public will profit and sustainable prosperity could be reachable.

RG: Politics is dominated by men, it is hard for a woman to rise in politics, yet it is evident that if our governments have the perspective of just one gender, we are wasting and not profiting from the ideas and creativity of the other half of the population. This is sad and stops us from further development.

I’m happy that things are evolving in engineering and more women are entering in STEM fields, and I hope the same will occur in politics. But for that to occur faster (because the actual progress is too slow) we need policies and programs together with a dramatic change in culture. When we observed nature, the more biodiversity the better an ecosystem works and self-sustains. It is the same in the engineering and political fields; we need more women and more diversity. Indigenous peoples have ancestral knowledge that have assisted engineers since the inception of Canada by exploring our vast country. Foreign engineers bring different approaches to solve a problem sometimes cheaper, sometimes more efficient, sometimes less complex, sometimes less impactful on the environment.

EC: What advice would you provide to women who are considering a career in engineering?

RG: Be persistent, develop resilience, speak your mind, show your abilities and skills, but also remain truthful to your core values.

EC: What would you say to a young person who is considering whether engineering is the right choice for them?

RG: Sometimes we start engineering and pursue a specific discipline that doesn’t fit our preferences; in some disciplines your work is more isolated; others make you interact with people. Some have direct social impacts; others it is only indirectly. I would say take your time, explore, and know that it’s OK if a change in discipline appears to be a better choice.

Being an engineer is one of the best decisions I took in my life. It was not a peaceful river, but surely it provided me with excitement, a sense of value, and solidarity with my peers among whom I count many life-long friends.

RG: Have an open mind. In public life and at decisional level we must understand that not every social problem has a technological solution. [Engineers’] strength is in knowing how to identify and assess a problem and foreseeing solutions of different natures and approaches. There is a strong public service component that the electorate expects from candidates.

Read the other interviews in the Engineers on Parliament Hill series here.