At the Spring Annual Meeting of the Members, Engineers Canada officially welcomed Jean Boudreau as 2020-21 president. We caught up with Jean to get her thoughts on the presidency and what she hopes to accomplish during her tenure. 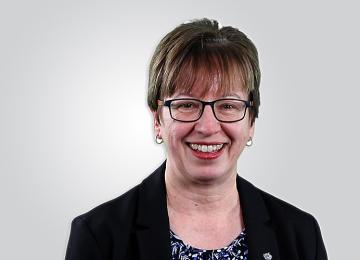 At the Spring Annual Meeting of the Members, Engineers Canada officially welcomed Jean Boudreau as 2020-21 president. We caught up with Jean to get her thoughts on the presidency and what she hopes to accomplish during her tenure.

What considerations led you to consider the role as president?

When I first came on the Board, there was a lot of concern/discontent/frustration from the continuing Board members and the regulators that Engineers Canada was straying away from the work the regulators thought was important. Engineers Canada wasn't listening to its owners and was veering off in its own direction at that time. My first meeting was the Board Workshop, and there was a lot of negativity and frustration in the room, but I also saw a lot of passion and desire to bring things around.

Since then, much ground has been covered in a relatively short period of time, with significant input from Engineers Canada staff and volunteers, as well as a lot of consultation with the regulators and their staff and volunteers. It was very encouraging and fulfilling to be part of that effort, and I have been keen to see it keep moving forward.

On that note, what are your thoughts on the current strategic direction of Engineers Canada?

The current strategic plan has a lot of operational aspects to it, which grew out of Engineers Canada’s transition to a new governance model designed to get things turned around and functioning for everyone. I am looking forward to seeing that strategic plan through and bringing forward the next one, which will be more of a true strategic plan. To be honest, I was surprised and very honored to be elected President-elect last year, especially because of what’s to come this year.

Do you feel that Engineers Canada is currently effective in delivering on its strategic goals?

Given the current (and changing) situation with COVD-19, Engineers Canada, along with everyone else in the world, has to juggle how they function now and how to move forward. I believe both staff and volunteers have been doing a fabulous job of it, but it also brings new challenges in how we accomplish our goals. I think it's safe to say the definition for success for this year has been revised a little, not only to continue functioning on a daily basis but also to continue to meet our original goals in our current strategic plan. To develop the new plan, and hopefully bring it to the members for their approval on the original timeline, will definitely be a success, given the current situation.

Beyond the delivery of the new strategic plan, what would you like to accomplish in your time as president?

My “campaign speech” to the board just before the election centered on accreditation, self-regulation, and diversity. Those are still my main focus points, and they are also very important issues for the regulators. That much was obvious in the presidents' reports that were presented at the Annual Meeting of Members both last year and this year. While I want to do everything I can, I also know that it takes time to move things forward.  We may not be able to say we have completely resolved these issues in one year’s time, but I would be happy to know that we’ve moved them further along.

What’s ahead for Engineers Canada in 2022?

As COVID-19 continued in 2021, the past year proved tricky yet transformative. With milestones like achieving gold level certification from Excellence Canada, launching the first 30 by 30 Conference, and shifting accreditation visits to fully virtual, Engineers Canada had a banner year.

The CEAB releases its first Accountability in Accreditation report

Engineers and Geoscientists BC Council election results. An interim practice restriction order against the engineer of …