Message from the Chief Executive Officer

The Enrolment and Degrees Awarded Report highlights strong growth in the number of students pursuing an engineering education.

Engineers Canada gratefully acknowledges the contribution of data and information from the deans and associate deans of the engineering and applied science faculties at Canadian higher education institutions.

Understanding these trends enables Engineers Canada and other members of the profession to: 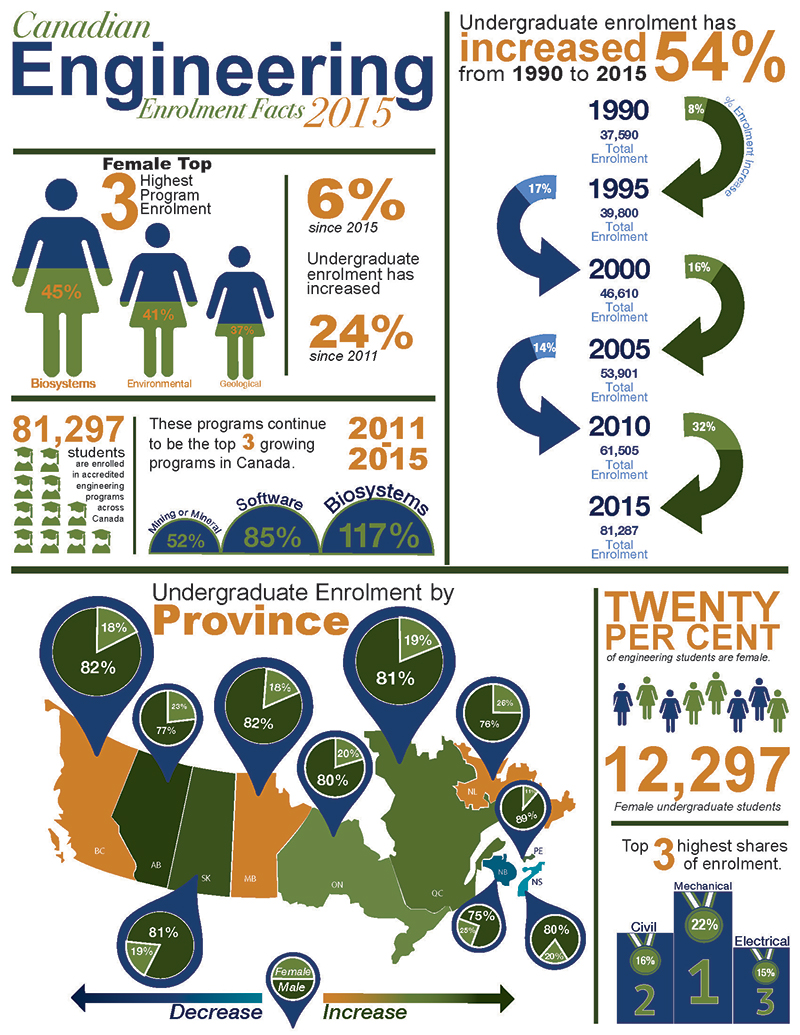 The results highlight enrolment trends by discipline and institution, as well as the number of undergraduate and postgraduate degrees awarded each year. These results reveal trends specific to discipline, education and gender, as well as the number of engineering graduates available to enter the labour market, international students’ participation in Canadian engineering education, and students studying in co-op programs. Enrolment trends in undergraduate, master’s and doctoral levels are compared, along with men and women studying and graduating from engineering programs. In 2016, a series of questions regarding Indigenous peoples’ enrolment and graduation from engineering programs was piloted and results are presented in this report. Engineers Canada plans to continue this data collection in coming years to be able to identify emerging trends.

For more detailed data tabulations corresponding to each chart, refer to Appendix A.

Chart 1.2 illustrates the trends occurring in enrolment by program. Mechanical, civil and electrical engineering programs continue to have the highest shares of enrolment with 22 per cent, 16 per cent and 15 per cent, respectively; however, these are not thefastest growing programs.

As shown in Chart 1.6, there has been steady growth in female enrolment in disciplines from 2011 to 2015. The disciplines with the most cumulative growth are biosystems, with a growth of 153 per cent, and software engineering with a growth of 137 per cent. Conversely, not all disciplines are growing; the percentage difference from 2014 to 2015, particularly in mining or mineral engineering, environmental, and engineering physics, follow a different trend, with negative four per cent, negative one per cent and negative one per cent growth, respectively. These three disciplines saw smaller female enrolment numbers in 2015.

Overall, postgraduate enrolment numbers increased seven per cent from 2014 to 2015 to 24,421 students. This is a dramatic increase compared to 2014 when the number of students enrolling declined 2.5 per cent from 2013 levels.

Following the trends of master's degrees, both full- and part-time doctoral student enrolment increased from 2014 and from 2011 reaching a total of 9,570 students. Chart 2.1 illustrates the trends in part-time and full-time enrolment in master’s and doctoral programs.

Charts 2.2 and 2.3 illustrate enrolment trends in both master’s and doctoral programs. Electrical engineering continues to have the most students enrolled in both levels, with 3,645 and 2,423 students, respectively. At both the master’s and doctoral levels, computer engineering has had the largest growth in student enrolment, with 19 per cent and 34 per cent, respectively.

Shown in Chart 2.9, in 2015, there were 1,425 doctorates awarded, reflecting an increase of three per cent from 2014 and a 37 per cent increase from 2011. Female doctorates account for 22 per cent of total doctoral degrees awarded in 2015, which is consistent with the proportion of female doctoral students (22 per cent).

A total of 22 post-secondary institutions responded. Three of those were unable to find the information required to respond to the survey questions. Because of the small sample size, the information that is provided on Indigenous student enrolment is only provided in aggregate form to assure anonymity.

Data found in the following tables can also be downloaded in Excel format.

For 2007 and onwards, data are based on the average number of students enrolled over the fall, winter and summer terms.

In the Appendix section of this report, all university names, where appropriate, have been abbreviated. The chart shown below lists the complete name of the school and the abbreviated name that is used.

BRITISH COLUBIA, THE UNIVERSITY OF

BRITISH COLUMBIA-OKANAGAN, THE UNIVERSITY OF

School of Construction and the Environment

CALGARY, THE UNIVERSITY OF

Faculty of Engineering and Design

Faculty of Engineering and Computer Science

School of Engineering and Information Technology

MANITOBA, THE UNIVERSITY OF

Faculty of Agricultural and Environmental Sciences

Faculty of Computer Science and Faculty of Engineering

College of Science and Management

ONTARIO INSTITUTE OF TECHNOLOGY, UNIVERSITY OF

Faculty of Engineering, Architecture and Science

Faculty of Applied Science and Engineering

WESTERN ONTARIO, THE UNIVERSITY OF

Faculty of Science and Engineering

Canadian discipline categories as used in this report

This section provides a comprehensive listing of program titles, as provided by the post-secondary, which are currently offered at both the undergraduate (accredited) and postgraduate levels in Canada only.  The “discipline” listing is the broad category within which a number of similar programs are grouped.  While this report does not provide detailed data on individual programs, the information can be obtained by contacting Engineers Canada.

Several universities in Canada have common first-year and, in some cases, second-year programs.  Students in these programs do not declare a discipline of study in their first year or, as applicable, second year. The total number of students in common first-, second- and qualifying-year programs have been separated from the “Other” category, beginning with the 1997 data. This subdivision will be continued in future years.

The bachelor of engineering degree awarded by Dalhousie University is normally conferred in association with one of several associated universities. The program of study is divided into two parts: the associated universities offer programs in engineering covering the ?rst part of the requirements for the degree and the Faculty of Engineering at Dalhousie offers courses in several departments of engineering covering the second part. There are other higher education institutions in Canada that operate under this model. Under the Accreditation Board's regulations for granting credits, a formally documented validation procedure must be in place.

Some of the associated universities include the following: